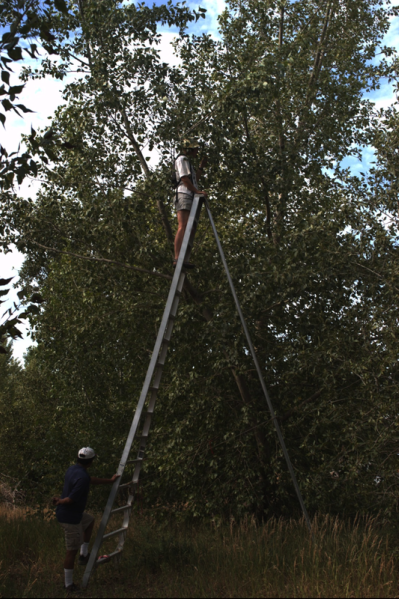 While we have long known that plant species diversity promotes animal diversity, only recently have studies investigated the effects of genetic diversity within a plant species or hybridizing system on the structure of the dependent community.  Using cottonwood common garden and manipulative field studies with over 200 different species of arthropod herbivores, predators, parasitoids, and detritivores, we were successful in tracing the effects of plant genetics from individual trees (Wimp et al. 2005) to stand-level (Wimp et al. 2004) and regional (Bangert et al. 2006a, 2006b) scales, as well as understanding how the effects of host plant genetics cascade to higher trophic levels via their consequences for keystone herbivores (Wimp and Whitham 2001, Wimp and Whitham 2007).  Plants more similar in genetic make-up supported arthropod communities more similar in species composition, whereas plants dissimilar in genetic make-up supported arthropod communities less similar in species composition.  I have continued my research in community genetics in order to understand the mechanisms underpinning the relationship between plant genetics and arthropod diversity, the generality of our findings, and the extent to which plant genetics shapes arthropod phylogeny.  If events that shape the genetic structure and evolution of one species have such broad-reaching community-level consequences, then evolution and community ecology are much more tightly linked than previously thought.  This is not only relevant to general ecological and evolutionary theory, but is also important from a conservation perspective as it suggests that the preservation of plant genetic diversity is an important strategy for conserving the dependent animal community.